History Of The Chamber

In November, 1999 the first version of Chamber of Commerce – on the Web™ was created.  It was known as the International Association of Professionals Online (IAPO). 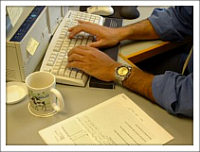 The original vision was to raise the standards of ethics and professionalism for online business.  The vision was embraced, and the association grew quickly.  As with any growing organization, IAPO underwent changes and enhancements as it grew.

Less than a year later, IAPO became the International Council of Online Professionals.  The idea expanded to incorporate self-regulation for business on the World Wide Web.

The acronym – iCop – quickly branded and came to represent members who policed themselves to protect the consumer.  iCop members created a lofty reputation as business owners of the very highest ethical standards.  Members were required to adhere to strict ethical and professional guideline criteria, and the list was lengthy.

iCop provided a space for consumers to report member businesses if they felt they had been unfairly treated.  These situations were investigated and always settled to the satisfaction of the customer.  Customer service was given the highest priority.

During the first 11 years, the organization existed mainly in the niche of “internet marketing.”  The majority of members were those who sold information products.  iCop itself worked tirelessly to raise the reputation of that genre over-all.

However, as the organization became more and more well-known, iCop gained members from other areas of online commerce.  Business owners with diverse services and tangible products joined the group.

In many ways, iCop trained new online business owners in the finer points of running highly professional and successful companies.  Those companies tended to remain members of iCop over many years.

By the end of 2010, it became clear the organization was ready for the final step.  Members were rarely reported by customers for wrong-doing.  iCop was ready to become an organization for those with no need to be told how to run their businesses.

In January, 2011 iCop was transformed into Chamber of Commerce – on the Web.™  All ethical standards remain in place.  Internet marketers who only sell “How to Make Money Online” information products, or who sell money-making schemes, will not participate in the Chamber.

Chamber of Commerce – on the Web™membership now includes a much broader range of solid and stable businesses using the World Wide Web as a first time, or additional, sales environment.

The wider marketing world sometimes overlooks email newsletters. Viewed as too old-school compared to other digital tools, newsletters are great for engaging customers.

Aligning them with other components of a marketing campaign takes planning, but the newsletter's effectiveness is hard to beat.

“People don’t realize all of the benefits that are built into their policy,” says Robert Passmore, assistant vice president of the Property Casualty Insurers Association of America, an industry trade group. But if you read your policy closely, he says, you might be surprised at what’s covered.
Full Story

When you visit a website, you often find yourself waiting and waiting for advertisements to load. Video starts playing automatically, and animated ads jump in front of what you were there to see. The seconds tick by.
Full Story

Chamber of Commerce – on the Web™ is not a tax exempt organization, therefore, owes no allegiance to any government lobbyists - nor do we contribute money to political parties.

Our only allegiance is to those politicians who fully support legislation that enhances online business as well as worldwide cooperation.

The Chamber will never fail to actively encourage members to lobby, from the grass roots level - on relevant legislation in all member countries – to advance and protect the pursuit of online business.

Online Report Information
Links to necessary contact information for anyone who uses the World Wide Web and wishes to file a report regarding unethical online behavior - as well as links to find important information.
Contacts
Extreme Freebies
These are some of the tools used by Chamber of Commerce – on the Web™ Members. They are listed here as a service to the online community.

Be the Change
Save a Life
A child dies every 10 seconds from diseases that are preventable with proper hygiene.

Chamber of Commerce – on the Web™ both supports & encourages members & visitors to: